Sale of Books to the Library of Congress (1815)

Thomas Jefferson was instrumental in rebuilding the Library of Congress when he sold the bulk of his book collection to the United States government in 1815.

During the War of 1812, British forces entered Washington, D.C., burning the Capitol building and the 3,000-volume library inside it. Writing to Samuel Harrison Smith in September 1814, Jefferson expressed his particular distress at this loss: "I learn from the newspapers that the vandalism of our enemy has triumphed at Washington over science as well as the arts, by the destruction of the public library with the noble edifice in which it was deposited."1 Recognizing that it would be difficult for Congress to replace the library that had been lost, given the war and the difficulty of procuring items from Europe, Thomas Jefferson offered up his large personal library to Congress.

In his letter to Smith, Jefferson indicated that he had intended that his library should eventually become public property and be offered at his death to Congress at whatever price was acceptable. But with the congressional library's destruction, Jefferson felt that it was the proper time to offer his library to Congress, "without regard to the small remnant of time, and the barren use of my enjoying it."2 He agreed to accept any valuation and payment terms Congress decided on (even payment after the war had ended), but insisted if Congress agreed to purchase his library, it should be purchased in its entirety.

Podcast: Jefferson and the Library of Congress » 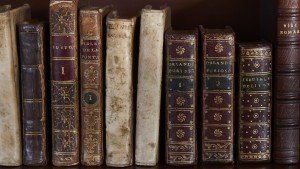 Throughout his lifetime, Thomas Jefferson acquired thousands of books for his own personal collection. The majority of his books, however, would not stay by his side forever. In this episode of Mountaintop History, Monticello Guide Kyle Chattleton shares the story of how Jefferson's collection helped restart the Library of Congress.

Jefferson's offer was met by warm support from many in the House and Senate; still, the bill introduced to authorize the purchase of Jefferson's library faced congressional opposition, particularly from the Federalists, such as Cyrus King, who argued that Jefferson's books would help disseminate his "infidel philosophy" and were "good, bad, and indifferent ... in languages which many can not read, and most ought not."3 The bill finally passed with a narrow margin along party lines.4

Georgetown bookseller Joseph Milligan, who had been engaged to count the number of books by size in Jefferson's book catalogue, determined that the library had a total of 6,487 volumes. The terms of the sale were thus fixed at $23,950 for the 6,487 volumes, with deductions to be made if the actual count was less than the number of books recorded in Jefferson's catalogue. When Jefferson later completed his own physical count of the number of volumes he had in his possession, he found that he had 6,707, or 220 more than had been reported to Congress; he had inadvertently omitted recording some volumes in his catalogue, and others were missing. He did not think it was right to retain the surplus books, nor did he ask for the extra $1,172.50 due to him from Congress. Jefferson did utilize the proceeds of the sale to settle some debts. Of the $23,950, Jefferson arranged to remit $10,500 to settle his debts with William Short, and $4,870 to settle his debts with John Barnes of Georgetown.

Jefferson received news of the finalized sale in February 1815.5 The books were shipped starting in mid-April in the bookcases that they already occupied;6 they were transported in ten wagons to Washington, and arrived by the middle of May. On May 8, 1815, as the last wagon-load of books left Monticello, Jefferson remarked in a letter to Samuel Harrison Smith, who had been instrumental in the sale, "an interesting treasure is added to ... [Washington, D.C.], now become the depository of unquestionably the choicest collection of books in the US. and I hope it will not be without some general effect on the literature of our country."7